I wanted to build myself a MAME pedestal with a Raspberry Pi 3. I ordered a cheap joystick plus LED kit from eBay, and it came with this controller board. The print on the back reads USB CY-822B led-joystick. After a lot of Google searches, I came up pretty empty on results. So I decided I would post what I know about this board for others.

This board should be AUTOMATICALLY recognized by your OS. Windows, Linux, Mac, whatever. On Windows is appears as a Generic USB Joystick / HID-compliant game controller.
Below, you can see what the back side label says, and what the MAME software reads it as. Example, the top plug is K1 according to the back of the board (see the back side of the board picture below). The MAME software reads the button plugged in as L2.
I read another post somewhere referring to this board as the Bosega 822. Is it made by Bosega? I have no clue.

Many eBay listers just copy bad information from other sites for their listings, and don't provide any useful information for noobs like me in setting this up.

MODE - this port is absolutely useless. Might as well fill it in with hot glue. What does it do? It switches the Joystick input from the digital d-pad to the analogue joystick. Thing is, this board doesn't have the analogue joystick socket. It may be possible to solder on some sort of connection for an analogue joystick, but that will have to be for another post. NOTE: if the joystick isn't working for you, connection a button to MODE and try switching modes.

TURBO - this button is used by pressing it PLUS any other of the switch buttons. Let's say I want to put the L1/A button into auto fire. It press AUTO and L1/A at the same time. L1/A is now in auto fire mode. Instead of having to tap tap tap constantly on L1/A, I can just hold it down, and the controller will tap tap tap for me.

AUTO - use it in the same way as TURBO. The difference is the controller will tap tap tap the button without me having to press the button.
EDIT: February 2020 - I happened to be tinkering around with this board and realized I made an error in some of my descriptions. I've corrected my errors. I've also added some more pictures to explain things better.

Wiring up the buttons 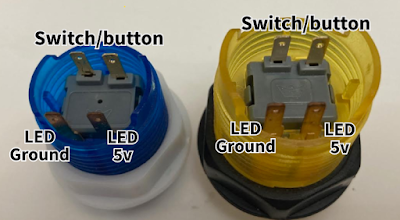 This board is designed to pass USB 5V to an LED button. Depending on how the connector cable is configured, the LED in the button will either always be on, or only illuminate when pressed.
I found this reference image online.

When connected to the controller board 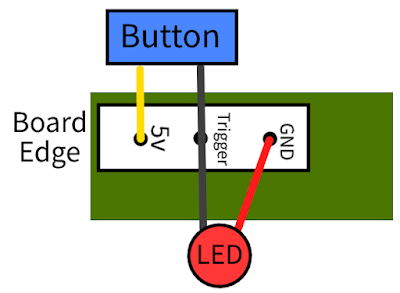 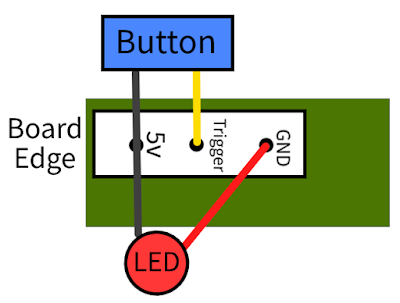 INNER PIN (the one with the red wire) is COMMON / GROUND.
OUTER PIN is 5V.
CENTRE PIN is trigger
NOTE: The wiring is how I received these from eBay. Having RED as ground/common may be confusing. I would normally use black as ground/common. 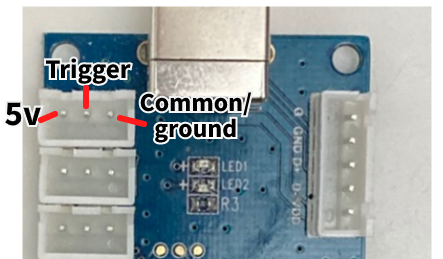 Pressing the button sends 5v to the Centre Pin.
My wires came configured as always on. I like the way my MAME console looks with all the buttons always lit up. I'll have to check what the current draw is with all the LEDs lit. Since I have two controllers, that's 24 LEDs drawing 5V from the USB power supply connected to my Raspberry Pi 3. It didn't seem to have any issues. I plan on using a powered USB hub between the RPi3 and controllers anyway.